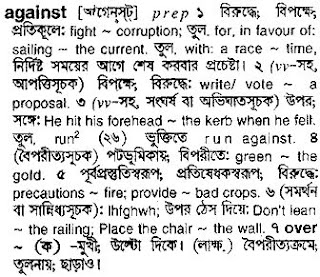 Definitions of against
in opposition to.
the fight against crime
synonyms of Against :
opposed to, in opposition to, hostile to, averse to, antagonistic toward, inimical to, unsympathetic to, resistant to, at odds with, in disagreement with, dead set against, anti
in anticipation of and preparation for (a problem or difficulty).
insurance against sickness and unemployment
in conceptual contrast to.
the benefits must be weighed against the costs
in or into physical contact with (something), typically so as to be supported by or collide with it.
she stood with her back against the door