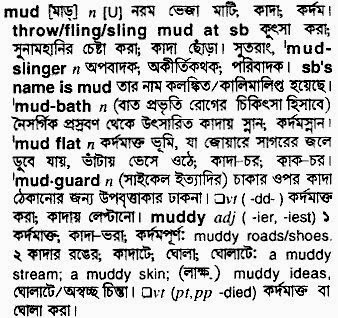 Origin of Mud word
German probably gave mud to English, in the Middle Ages. The expression someone’s name is mud, ‘someone is in disgrace or unpopular’, draws on an 18th- and 19th-century slang use of mud meaning ‘a stupid or foolish person’. As clear as mud is found from the early 19th century; drag through the mud arose in the mid 19th century, and mud sticks is recorded from the late 19th century. Here’s mud in your eye, said before drinking, dates from the 1920s. Muddle (Late Middle English) originally meant ‘wallow in mud’
Phrases